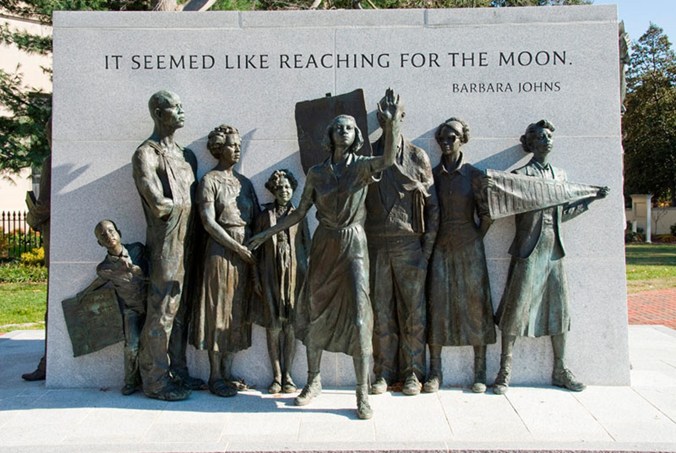 Two Virginia locations have been included with a newly-launched website for the U.S. Civil Rights Trail.

In partnership with Travel South USA, the U.S. Civil Rights Trail is a collection of more than 100 churches, courthouses, schools, museums and other landmarks primarily in the Southern states where activists challenged segregation in the 1950s and 1960s to advance social justice. Virginia locations include the Robert Russa Moton Museum in Farmville and the Civil Rights Memorial in Richmond.

The Robert Russa Moton Museum is the national center for the study of Civil Rights in Education. Formerly Robert Russa Moton High School, the museum was the site of the first non-violent student demonstration in 1951. This action led to the 1954 Brown vs. Board of Education case before the U.S. Supreme Court that mandated equal education for all Americans, a hallmark in the civil rights movement. It was named a National Historic Landmark in 1998.

The Virginia Civil Rights Memorial, located in Richmond’s Capitol Square, was erected in 2008 to honor the actions of 16 year-old Barbara Rose Johns of Robert Russa Moton High School along with her fellow students, their parents, and community leaders and civil rights attorneys.

“It is an honor to be included within the newly launched U.S. Civil Rights Trail,” said Cameron Patterson, Managing Director of the Robert Russa Moton Museum. “This important recognition acknowledges the statewide and national importance that the Moton students played in expanding equality for all Americans. We look forward to working with Travel South and other sites that are a part of the U.S. Civil Rights Trail to tell important stories of individuals who advanced social justice within our country.”

In addition, Virginia has a number of other sites integral to the nation’s civil rights history, including:

“Our nation’s civil rights history has its roots in Virginia,” said Virginia Tourism President and CEO Rita McClenny. “These historic landmarks and cultural institutions across Virginia allow visitors to walk in the footsteps of those who fought for change and learn the struggle through some of the most difficult yet inspiring periods of American history, making the destination desirable for travelers seeking authentic experiences.”

The U.S. Civil Rights Trail website includes an interactive map of locations important to the Civil Rights Movement, as well as information to help visitors plan their journey to cities along the trail, with places to see and things to do at each destination. Users will also find in-depth explorations crafted to allow them to experience the destination or event in a more comprehensive way.