RICHMOND - Governor Terry McAuliffe announced today that the PBS Civil War drama series Mercy Street will be returning to Virginia for a second season of filming.  Season one filmed on location in Central Virginia and has been both a critical and popular success since premiering in January. The series is inspired by real events that took place at Mansion House, an Alexandria … END_OF_DOCUMENT_TOKEN_TO_BE_REPLACED 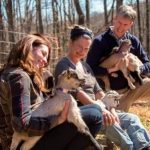