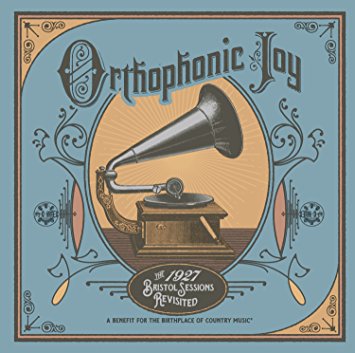 Bristol, VA/Tenn. – The Birthplace of Country Music is pleased to announce that the “Orthophonic Joy: The 1927 Bristol Sessions Revisited” album will be released on Tuesday, May 12, 2015.

Also known as the “Big Bang of Country Music,” the legendary recordings by Ralph Peer took country music to a new level and produced pioneers of the genre, such as Jimmie Rodgers and the Carter Family. Johnny Cash referred to this event as “the single most important event in the history of country music.”

The idea to recreate the 1927 Bristol Sessions had been discussed within the Birthplace of Country Music organization for years, but the serendipitous connection between board member John Rainero, veteran songwriter Rusty Morrell and Grammy-winning producer Carl Jackson helped bring “Orthophonic Joy: The 1927 Bristol Sessions Revisited” to life. With support from the Virginia Tourism Corporation, Tennessee Department of Tourist Development, Bristol Convention and Visitors Bureau, and the Birthplace of Country Music, the album was created and produced throughout 2014 and early 2015.

“My dear friend Rusty Morrell approached me with the idea to produce a project honoring the original 1927 Bristol Sessions,” Jackson said. “He was very aware and fond of a couple of other multi-artist ‘tribute’ projects I had produced and felt I was the guy who could bring his vision to life. In my opinion, the importance of those 1927 recordings cannot be overstated, and I am truly honored that Rusty asked me to shine a new and loving light on some of those classic works.”

The Smithsonian Institution-affiliated Birthplace of Country Music Museum in Bristol, Virginia is dedicated to preserve the legacy of the 1927 Bristol Sessions and their lasting influence on American popular music. The museum is part of The Crooked Road, the tie that binds Southwest Virginia’s music heritage to a rich history. The Crooked Road spans more than 300 miles, showcasing the land and its people inspired legends like the Carter family, the Stoneman family, Dr. Ralph Stanley and Johnny Cash. Its authentic culture continues to inspire musicians today.

“Orthophonic Joy” is a modern take on the authentic, legendary music birthed in the foothills of the majestic mountains across Southwest Virginia and Tennessee. The songs, many of which have been passed from generation to generation, are meant to inspire travel to a region which music lovers have long revered as sacred ground.

“The 1927 Bristol Sessions have often been honored for their impact on the world’s music,” said Leah Ross, executive director, Birthplace of Country Music. “With the opening of the Museum, the release of ‘Orthophonic Joy,’ and the upcoming launch of a new WBCM radio station, BCM and the team of irreplaceable partners who are part of these endeavors are ensuring the legacy of the 1927 Bristol Sessions lives on for generations to come.”

Three key partners on this project include the Tennessee Department of Tourist Development, Virginia Tourism Corporation, and the Bristol Convention and Visitors Bureau.

“In Tennessee, we like to say the music is ‘in the water.’ It flows from every corner of the state, from cities like Nashville, Memphis, and Bristol and small towns like Brownsville, Smithville and Franklin,” said Commissioner Kevin Triplett, Tennessee Department of Tourist Development. “Entertainment icons Dolly Parton, Sheryl Crow, Vince Gill, Emmylou Harris and Marty Stuart are breathing new life into the 1927 Bristol Sessions. The Orthophonic Joy project is a vivid reminder of our musical roots and will inspire future generations of music makers and fans.”

“The music still comes out of the hills as a new generation of performers take mountain music back into the mainstream,” said Rita McClenny, president and CEO of Virginia Tourism Corporation. “It can be heard at general stores, barber shops, ice cream stands, small town theaters, and front porches throughout the region. Visitors can easily meet the musicians and presenters, some of whom are direct descendants of some of the most famous names in the genre. This experience is not manufactured. It is unquestionably an authentic Virginia-and American-experience.”

“This album further establishes why Bristol is known as the Birthplace of Country Music,” said Matt Bolas, executive director of the Bristol Convention and Visitors Bureau. “Bristol’s music heritage draws visitors from around the world, and this album along with the Bristol Rhythm & Roots Music Festival, year round live music and concerts, and the Birthplace of Country Music Museum amplifies why Bristol is a music destination.”

The album is currently available for pre-orders through Amazon and iTunes. The album will also be available for purchase at the Birthplace of Country Music Museum on May 12, 2015.

Disc 1
1. “Don’t Deny Yourself the Sheer Joy of Orthophonic Music…” (narration by Eddie Stubbs)
2. I’m Redeemed – Doyle Lawson & Quicksilver
3. “All They Needed Now Was Talent…”
4. Bury Me Beneath the Willow – Emmylou Harris
5. “Tonight He is Playing the Tune at Police Headquarters…”
6. Black Eyed Susie – Marty Stuart
7. “An Early Tradition of Scrapping for Rights and Royalties…”
8. When They Ring Those Golden Bells – Dolly Parton
9. “I Wish I Had Some Rocks to Throw at Them…”
10. The Storms Are On the Ocean – Ashley Monroe
11. “Any Song with a Story Will Go to the People’s Hearts…”
12. I Am Resolved – The Shotgun Rubies
13. “A Hoe-down Social in a Mountain Cabin…”
14. Sweet Heaven When I Die – Steve Martin and the Steep Canyon Rangers
15. “Daddy Never Knew When He Would Come Up With an Idea for a Song…”
16. The Soldier’s Sweetheart – Vince Gill
17. “Where the Blues Meet the Church…”
18. To The Work – Keb’ Mo’

Disc 2
1. “Singers Who Had Not Visited Bristol During Their Entire Lifetime Arrived…”
2. Where We’ll Never Grow Old – The Church Sisters
3. “Love, Loss, and the Perils of the Moonshine Business…”
4. Darling Cora – Corbin Hayslett
5. “Ramblers Riding the Longest Train I Ever Saw…”
6. In the Pines – Brad Paisley & Carl Jackson
7. “Twenty-One Good Years at the Throttle…”
8. The Wreck of the Virginian – Ashley & Shannon Campbell
9. “Prized and Practical, Brutal Ballads…”
10. Pretty Polly – Carl Jackson
11. “Tremendous Heart Punch and Appeal…”
12. The Wandering Boy – Sheryl Crow
13. “Gotta Catch That Train…”
14. Train on the Island – Larry Cordle & The Virginia Luthiers
15. “History Saws and Strums Along with Itself…”
16. Johnny Goodwin / The Girl I Left Behind – Jesse McReynolds & Carl Jackson
17. “Introducing the Orthophonic Choir…”
18. Shall We Gather at the River – The Chuck Wagon Gang & The Orthophonic Choir
19. “The Birthplace of Country Music…”

For more information about the Birthplace of Country Music and the Orthophonic Joy Album, visit birthplaceofcountrymusic.org.

About the Birthplace of Country Music Museum
The Birthplace of Country Music Museum, an affiliate of the Smithsonian Institution, explores the history of the 1927 Bristol Sessions and their lasting impact on our music heritage. From the Bristol Sessions and beyond, our region continues to influence music around the world. The 24,000 square foot museum is located at 520 Birthplace of Country Music Way in Historic Downtown Bristol, Virginia. Through text and artifacts, multiple theater experiences, film and sound, and interactive, technology-infused displays – along with a variety of educational programs, music programs, and community events, the exciting story of this music and its far-reaching influence comes alive.