For the hardcore, metal or punk rock music lover, there are plenty of places in Virginia to get heads banging, ears ringing, and mosh pits going. Many of Virginia’s cities have roots in the development of these music genres, and many venues, record stores and rock historic sites are still around serving the rock community.

Richmond heavy metal band Inter Arma performs “An Archer in the Emptiness” live at the Byrd Park Pumphouse in Richmond. 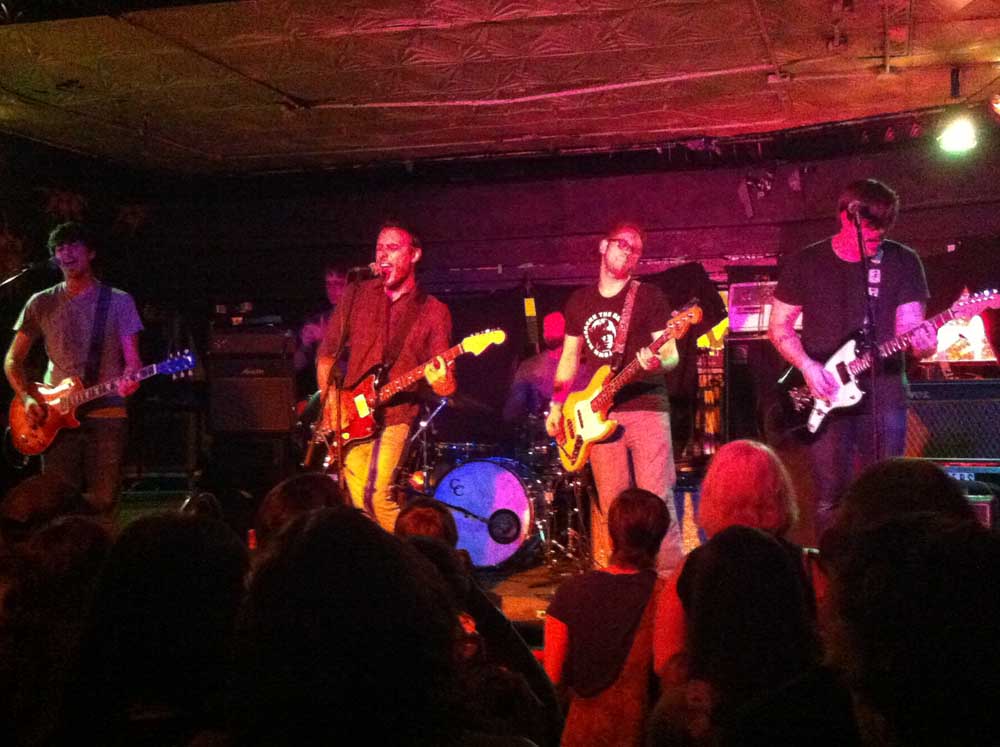 Richmond is known for its active rock history. The city is perhaps best known for shock-metal band GWAR, as well as many other punk and metal names like Lamb of God, Avail, Strike Anywhere, and others. Going to Richmond puts you in the middle of rock history to see where big names started while catching new acts who could make it big.

The National historic theater was built in 1923 and was part of a city block once known as Theatre Row. In 1968, it was converted into a cinema, which closed in 1983. Restored and reopened in 2008, The National is now used as a performing arts and music venue and hosts numerous rock acts throughout the year.

Strange Matter has housed a punk rock club for nearly three decades. It was most famously known as Twisters throughout the 1990s, and since then has been known as Club 929, The Nanci Raygun, and Bagel Czar before it re-opened in 2009 as Strange Matter. The club hosts up-and-coming local and national touring acts in the punk, metal, experimental and hardcore genres nearly every night.

The Canal Club in Richmond’s Shockoe Bottom district has been serving the rock community for many years. The venue features national, regional and local hard rock and metal acts on a weekly basis with two floors of music, the upstairs for national acts and the downstairs for smaller, intimate setting with seating in the back and standing up front.

Other Richmond music venues that host hard rock music include The Camel and The Broadberry, which both host all genres of music from punk to bluegrass to electronic. Wonderland in the Shockoe Bottom area and Bandito’s Burrito Lounge in Richmond’s Museum District regularly hosts shows that cater to underground rock, heavy metal, thrash, punk, and more.

Richmond band GWAR has been recording, performing and touring for decades, bringing their theatrical show and metal music to stages across the world.  The band, along with local restaurateur Travis Croxton of Rappahannock Oysters, opened GWAR Bar in 2015 with a menu that features vegan and vegetarian options, along with craft cocktails. The bar also features karaoke and open mic nights.

And no trip to Richmond would be complete with a visit to one of its many independent record shops. The rock or metal lover will need to check out Vinyl Conflict, which focuses strictly on hardcore, punk, and metal releases. Or head to another favorite record store nearby.

Norfolk is no stranger to the hard rock, metal and punk scenes. The area was popular in the 1980s for the local underground punk rock scene and continues to draw crowds at its venues.

The NorVa opened in 1917 as a Vaudeville theater then thrived as a premier movie theatre into the 1970s. In 1998, it was renovated for its current use as a live music venue. The NorVa hosts hard rock acts often as well as other genres.

Smaller spots in the Norfolk area with shows for rock and metal fans include Riffhouse Pub in Chesapeake, Charlie’s American Cafe in the Riverview neighborhood, the Norfolk Taphouse in the historic Ghent district, and FM Restaurant and Hell’s Kitchen, both in downtown Norfolk.

While in Norfolk, make sure to head to Skinnie’s Records, located in Ghent. The store specializes in punk and hard rock music from vinyl to CDs as well as accessories including clothing, leather goods, patches, pins and posters. Or head to another favorite record store nearby.

Rock lovers can also head to Virginia Beach to catch the occasional metal show at Shaka’s Live, located in the heart of the Virginia Beach Oceanfront or see a major rock act during the summer months at the 20,000-seat outdoor concert venue Veterans United Home Loans Amphitheater at Virginia Beach. 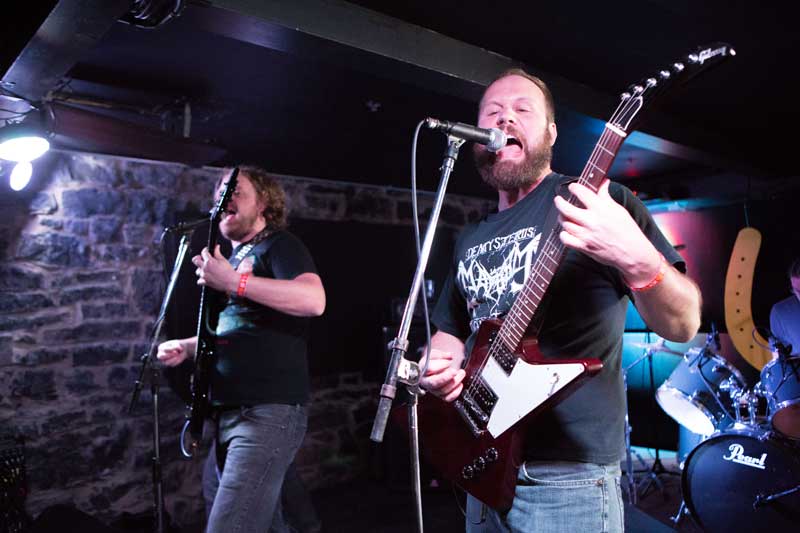 Hardcore, metal and punk music has always had a home in the Shenandoah Valley. The Do-It-Yourself (DIY) culture thrived for years in Harrisonburg thanks to the passionate community, the numerous live music venues, and the proximity of James Madison University.

Many of Harrisonburg’s restaurants and live music venues cater to the hardcore, metal, and punk music lover. The Golden Pony in downtown Harrisonburg hosts live music Sunday-Thursday and DJs on the weekends. The venue also has pinball machines, an art gallery, an outdoor patio, and two full bars. Brothers Craft Brewing hosts Monthly Metal on the last Wednesday of each month featuring the best local and regional metal.

Every year in April, Harrisonburg hosts MACROCK (formerly the Mid-Atlantic College Radio Conference), an annual music festival showcasing a diverse array of independent musical acts, including many from hardcore, punk and metal genres. The event takes places across multiple music venues throughout the city and also provides educational and enriching community events celebrating independent music through events such as record and publishing label expositions, panel discussions, and live performances. 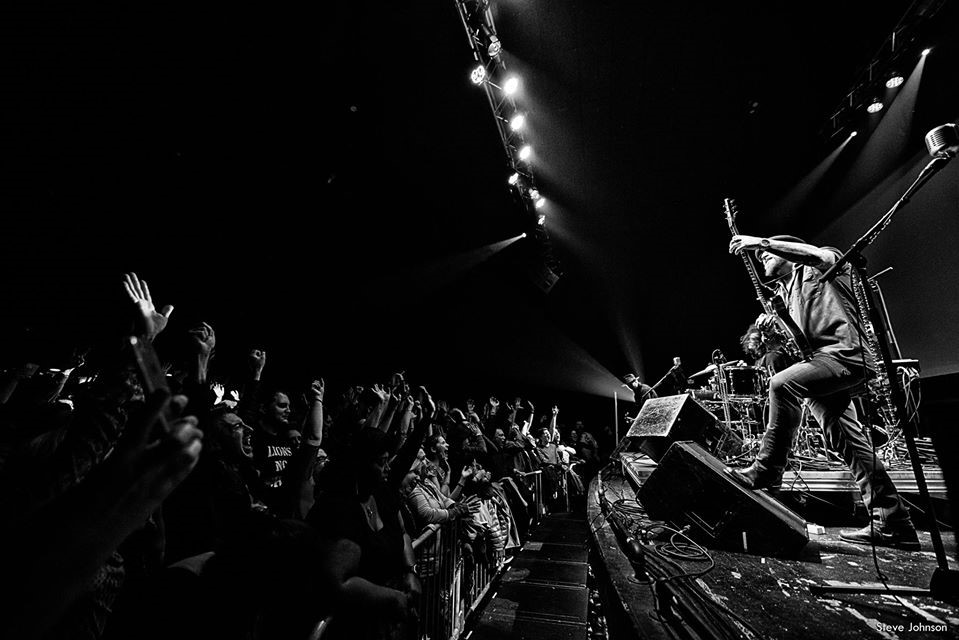 While there are many areas in Washington, DC that cater to the hard rock, metal, or punk music lover, Northern Virginia itself has some worthwhile destinations.

The Tally Ho Theatre is a landmark in historic downtown Leesburg that brings in many hard rock shows a year. The venue was created in 1932 as a movie theater until it was sold and renovated in 2012, and started hosting live bands in a wide range of genres, including hard rock and metal.

Jammin’ Java in Vienna hosts music of all genres, but has the occasional hard rock show.

Also, pick up some records at Vienna Music Exchange in Vienna. The stores boasts a huge selection of metal records and plenty of punk, hardcore and rock LPs all packed into one spot. Or head to another favorite record store nearby.

Where are some other places in Virginia for metal, punk and hard rock lovers? Let us know in the comments below. For more music in Virginia, go to virginia.org/music. Share your Virginia music stories and photos with @VisitVirginia on Twitter and Instagram with the hashtags #vamusic and #vaisformusiclovers.