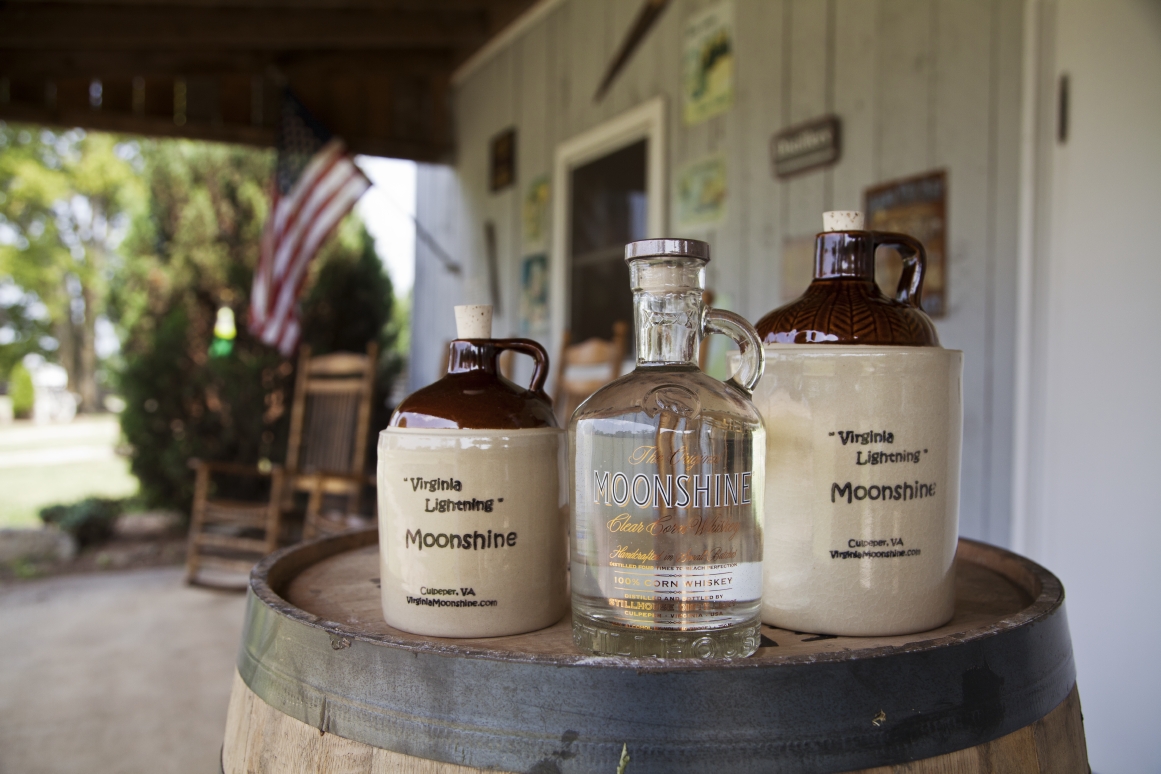 September is Virginia Spirits Month, and while you can celebrate with a beverage made by a bartender at a Virginia restaurant or a tour and tasting at a local distillery, learning the history behind the craft tells you what truly went into making that cocktail. So raise your glass, make a toast, and get a taste of Virginia’s distilling history.

Spirits in the New World

Virginia gives much credit to George Washington in his efforts towards making distilling a commercial success, but the first colonist to try his hand at distilling in the New World is a man less remembered in the average history book. An early English settler by the name of George Thorpe traveled to Jamestown to keep a close eye on his sizeable investments in the New World and quickly struck up a trading partnership with the Powhatan in the area. He discovered that by substituting the corn grown by the indigenous peoples for the European barley traditionally used in distilling whiskey, he could create the mash needed to make the drink. By 1620, Thorpe finished his first batch of corn whiskey, but the victory was short-lived. In 1622, he was killed during a clash with the indigenous locals. It would be over a hundred years before corn whiskey would take its place as the most famous Virginia spirit.

The Rise of Distilling in an English Colony 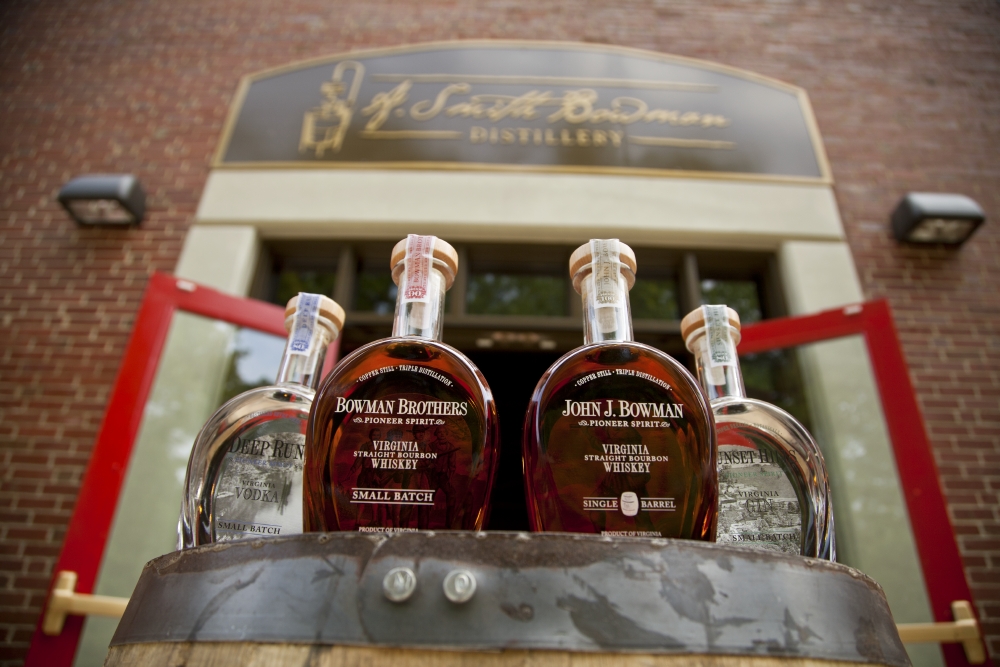 As the colonists began to build and spread further west, they began to realize the advantages of distilled spirits over beer. Although beer was much more palatable with everyday meals, it was hard to store it for long periods of time without spoiling, while spirits could be kept almost indefinitely. Additionally, transporting large amount of corn and rye presented problems, as the roads were dangerous and lugging wagonloads of grain would slow you down considerably. Transforming the corn or rye into spirits allowed for a smaller, more compact load. And finally, nothing went to waste when distilling; the farmers could utilize the spent grains as feed for their livestock. In Virginia, a more recent example of the conservational benefits of distilling is A. Smith Bowman, a farmer in 1935 who began producing the still-popular Virginia Gentleman Straight Bourbon Whiskey. Bowman grew the grains for the whiskey on his own farm, used trees from his lands to craft the barrels that would store the whiskey, and used the spent mash to feed his farm animals.

While making whiskey for personal use was popular, the spirit was not a staple in most taverns. Surprisingly, the spirit of choice in the taverns before the American Revolution was rum, but in the latter half of the 18th century, Britain began taxing rum heavily. Rather than throw their precious rum into the harbor like the famous tea rebellion, colonists simply altered their drinking practices. Scottish and Irish immigrants pouring into the country had been distilling whiskey for years in their homelands, and when they came to America, they brought the knowledge of their craft with them. After neighbors shared the secret of corn and rye as replacements for European barley, the new Scottish and Irish Americans began producing their own unaged versions of whiskey, which they referred to as “uisgebeatha”, the Gaelic term for “water of life”. This recipe for whiskey would remained virtually unchanged, emerging in the Appalachian Mountains of Virginia several millennia later as a tradition that would become world-renowned.

The Birthplace of Bourbon 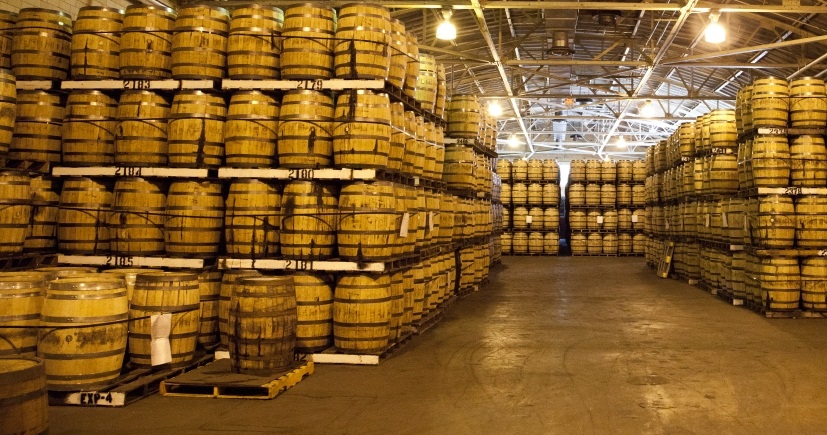 Kentucky bourbon is a staple in most bars today, but did you know that it was originally Virginia bourbon? As the United States solidified its standing as a new nation, the Commonwealth of Virginia redrew the county lines, separating Fincastle County into three new counties: Kentucky, Washington, and Montgomery. Farmers looking for new lands to plant moved into the area and started to make spirits almost immediately. However, their whiskey had a distinctive trait that separated it from the previous distillers: barrel aging. These Virginians found that storing the whiskey in charred oak barrels gave it a beautifully dark color and a flavor superior to unaged whiskeys. In 1792, this western portion of Virginia broke off, becoming the state of Kentucky. So while you might enjoy a Kentucky bourbon today, remember that Virginia started it all!

Distilling with a Founding Father

As the first American president, George Washington provided unforgettable direction to a country fresh from a brutal war, but before he was elected into office, he played a pivotal role in the Virginia distilling movement. Washington erected stills at Mount Vernon in the 1770s to make rum, but after taking advice from his Scottish plantation manager, James Anderson, he planted rye on his plantation and began distilling whiskey. Ultimately, Washington became the biggest producer of distilled spirits of his time, making up to 11,000 gallons of whiskey a year at Mount Vernon. Today, the original distillery has been carefully reconstructed, holding the distinct honor of being the only 18th century working distillery in the United States. 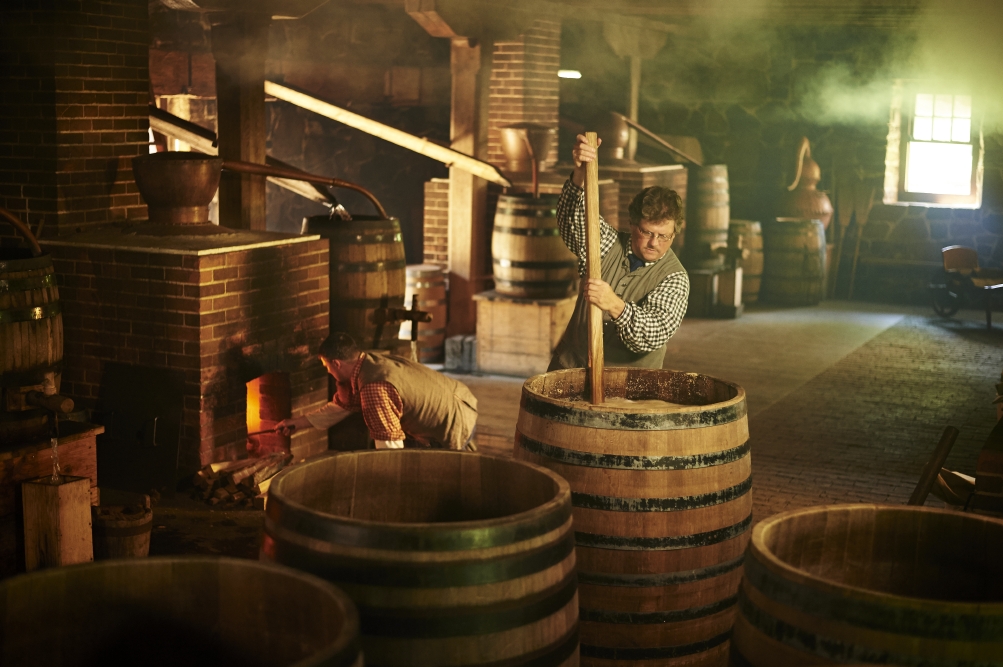 The Revolution came to a close in 1783, and relieved of the British taxes, the new American citizens were extremely unhappy to learn that the spirits taxes would now go to the newly established American government to help pay off the debts of war. Distillers in both Virginia and Pennsylvania known as the “Whiskey Boys” were especially angry at this development. Tax collectors sent to these distillers soon found angry mobs waiting for them, often with the unfortunate surprise of tar and feathers. The riots grew to a fever pitch, resulting in the Whiskey Rebellion of 1791. The perpetrators were caught and sentenced to death, but Washington eventually pardoned them in an act of understanding and compassion that caused the majority of the protests to cease.

Once distillers accepted the institution of taxation under the American government, the whiskey movement in Virginia grew steadily, reaching an all-time high that would last almost 130 years. As it grew, it also began to evolve, infusing the culture of the Appalachian Mountains into the spirits. Virginia’s Appalachian area was by no means a wealthy region, and since limited roadways made transporting crops difficult, the farmers turned to distilling a clear, unaged whiskey that could be quickly and efficiently produced. The whiskey was made illegally in the backwoods of the mountains, crafted in homemade stills that were not altogether safe. With this new movement in American distilling, the nickname “moonshine” was born. The term began to gain negative connotations with the birth of a new movement in America: the era of Prohibition. What was once an American tradition became a covert operation that stayed hidden from mainstream society’s view. Virginian distillers were a stubborn group, though, and refused to abide by the law. These Appalachian bootleggers distilled at night to avoid detection and during the driest years of Prohibition, almost every city in America had a speakeasy selling Virginia moonshine.

The End of Prohibition

Even after the repeal of Prohibition in 1934, moonshine stayed in the backwoods as an illegally-made product, while other distilled spirits resumed their legal production. The following year brought an indictment by the U.S. Government that would come to be known as the Great Moonshine Conspiracy Trial. This 1935 lawsuit brought 80 Virginians to court, charging them with the illegal production and distribution of moonshine whiskey in Virginia. The court case brought a sort of distinction to the bootleggers of Franklin, Virginia, recognizing the county for the infamy of producing the highest volume of illegal spirits in the United States. Thereafter, Franklin County informally earned the title of “the Moonshine Capital of the World”.

Due to the struggle that the Virginia spirits industry has faced since its American introduction, it is no surprise that Prohibition did not immediately end the problems associated with legal distilling. The Virginia Alcoholic Beverage Control System, set up with the fall of Prohibition in 1934, made small batch distilling virtually impossible for over 65 years.

But in the past few decades, Virginia distillers pushed for even more progress. Two such Virginians in particular made significant headway in changing laws. Chuck and Jeanette Miller, owners of Belmont Farm Distillery, convinced Virginia lawmakers to allow for distillers to offer tastings and product sales on-site rather than strictly at ABC stores. Since this alteration in Virginia law, dozens of distilleries have opened across the state, highlighting the depth of the Commonwealth’s distilling history and the high quality of the resulting spirits. In 2004, Virginia even became part of the American Whiskey Trail, a route that traces world-class whiskey along the Eastern United States. Virginia whiskey, bourbon, gin, brandy, rum, vodka, and even absinthe distilleries welcome visitors to tour, taste, and take home bottles of their signature spirits.

Ready to sample your favorite style of Virginia spirits? Below are a few of the most distinctive distilleries that offer tours and tastings, or check out the complete list of Virginia distilleries.